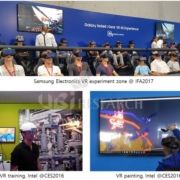 VR devices have been on the rise since 2016 and were expected to be an important factor in IT business, but have not yet made a big impact. At CES 2016, Intel exhibited applications that enable creative activities such as education and art. In 2017, Samsung presented games and movies that can be felt with the body in 4D form at the IFA VR experiment zone. 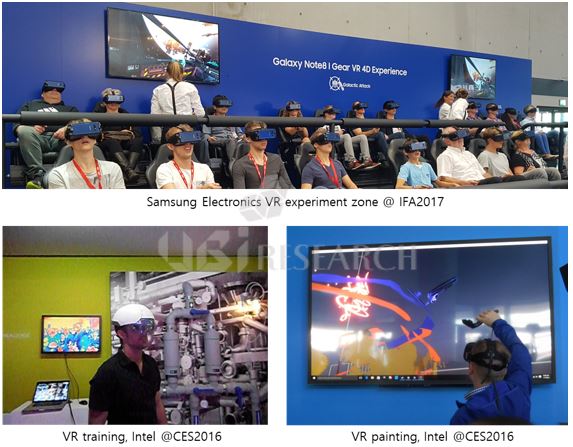 VR features excellent immersion and presence. A 1-inch display can look like a 60-inch display. The display that provides information uses micro-display, but LCoS (liquid crystal on silicon) has a slow response speed, poor color, and low contrast ratio. So the trend is changing to OLEDoS (OLED on silicon). Sony is making its own micro OLED and Panasonic is working with US Kopin to make VR.
Recently, VR devices are preparing to replace monitors. If it is made in high resolution, about 10 screens can be displayed on each VR monitor screen. In the future, the monitor market will change to the VR market. VR can emerge as the best dark horse in the IT market. VR may possibly also replace TVs. A head speaker with a much better three-dimensional effect is essential. There may also be changes in the movie theaters as a VR device might provide a 60-inch screen and provide a high sense of immersion into the film for movie-goers.
Micro OLED composition consists of TFT designed on a silicon wafer and OLED is formed on it. LGD’s WOLED method is used for OLED. The RGB method requires a fine metal mask, but the AP system is preparing a mask capable of 2000ppi or more using a laser. Because WOLED uses a color filter, there is a loss of about 10%. RGB may be more advantageous in terms of luminance, but for commercialization, WOLED resolution can be much higher. Since it has been developed for a long time, WOLED is expected to be applied. Applications include military, medical, industrial, viewfinder, smart glasses, and the like.