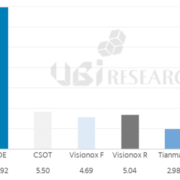 The details can be found in the ‘UBI Research China Trend Report’, and inquiries can be made on the UBI Research website.