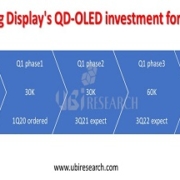 Samsung’s loss of LCD business can be estimated for two reasons. The first is the deterioration of profitability from China’s LCD over-investment, and the second is the transition to a new business with high added value.

Since the display is an essential product in the modern information society, demand is gradually increasing worldwide as the usage is increased. In addition, as the amount of information increases, the data to be expressed increases, so the display size must also increase. By these two factors, the display industry has the power to continue to develop. However, China’s LCD investments have continued to invest in large quantities over many years. In the wake of this, only two LCD companies in Japan, Sharp and JDI, remained, and the Korean LCD business also reached a point where it was necessary to organize the business due to deficits.

Samsung Display and LG Display have expanded the OLED business to respond to the low-priced panel of Chinese LCD companies, and have focused on producing OLEDs with the best image quality preferred by set makers with high brand power. Samsung Display already secured a market of $ 25.3 billion in the smartphone display business in 2019, and LG Display secured $ 2.2 billion in sales in the OLED market for TV last year.

Samsung Display has enjoyed tremendous sales and operating profit in the OLED business, but the LCD business has been in the red for several years. Samsung Display sells LCDs for monitors, mainly for LCDs for TVs, but has secured the optimal solution to replace them all as QD-OLEDs.

QD-OLED production, which Samsung Display started investing from this year, uses 8.5G equipment. This is because Samsung Display’s factory in Tangjeong is an 8.5G LCD line, which can reduce the cost of building an OLED production line. Samsung Display will produce 8K 65-inch QD-OLED panels at this plant starting next year. It also produces QD-OLEDs for 32-inch 4K monitors. Maintaining the TV and monitor panel business previously held by Samsung Display, profitability can be secured by selling expensive products.

Samsung Display started investing in QD-OLED 30K in the existing 8.5G LCD factory, but the total investment is 120K. The remaining investment is 90K. Samsung Display’s additional investment is expected to change in size and timing depending on the QD-OLED production situation starting next year. If a yield of over 60% is secured from the beginning of production, the remaining 90K can be invested in next year. This is the most desirable timing. It can be used without leaving the LCD engineer. To prepare for this situation, all LCD lines must be removed by the first half of 2021. The next scenario is when the QD-OLED yield is less than 60%. In general, when the yield is low, the plant cannot be fully operated, so it does not require much manpower. Since additional investment is appropriate after securing the yield, it is a method of separating the investment, investing 30 ~ 60K, and then investing the remaining size later.

Nobody know what will happen next year, but Samsung Display is steadily taking a step forward to secure the future business.

JDI decided to sell LCD production equipment to a foreign client for 200 million...