Plane source technology, which was first developed by OLEDON in the world, has the principle of depositing the first organic material on the metal surface and evaporating it upwards to produce fine pattern of 2250 ppi, which is ultrahigh resolution. In this plane source process, three processes such as the first deposition, the plane source inversion, and the second evaporation are necessary, and the number of the high vacuum chambers is increased when the mass production is applied. The belt plane source FMM deposition technology introduced by OLEDON has a concept of carrying out the above processes at a time in one evaporation equipment. This is a continuous plane source supplying deposition technology in which the metal surface is formed in a belt shape. 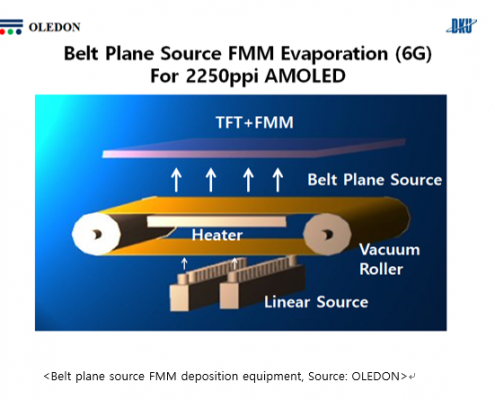 Hwang added, “Using vertical plane source enables smooth deposition process for the 12th generation class area substrate for QD-OLED TV without sagging problem. Vertical belt-plane source evaporation equipment adopts the concept of depositing the substrate in a standing-up position so that the load on the framed glass chuck and the open mask is very low. Thus, easy transportation of the substrate, and uniform deposition process of thin film over a very large area in the static state are possible.” This technology is expected to be applicable not only to the 8th generation but also to the cluster type mass-production evaporator with substrate sizes more than 10 generations in the future. 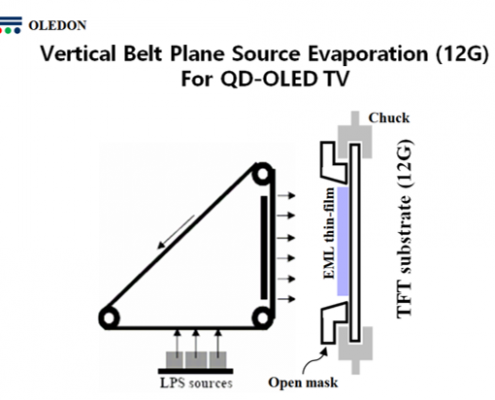 Commenting finally that the company has successfully completed the material denaturation test for blue materials and the blue dopant deposition test, Hwang expected the plane source deposition technology to be applied to both small & medium sized OLED and large area OLED manufacturing in future.