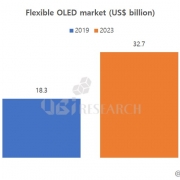 As foldable smartphones begin to be sold by Samsung Electronics, the flexible OLED industry (including foldable OLED) is expected to continue to grow.

Yi Choonghoon, CEO of UBI Research, predicts that the flexible OLED panel market will grow to $ 18.92 billion this year and expand to $ 32.65 billion by 2023. 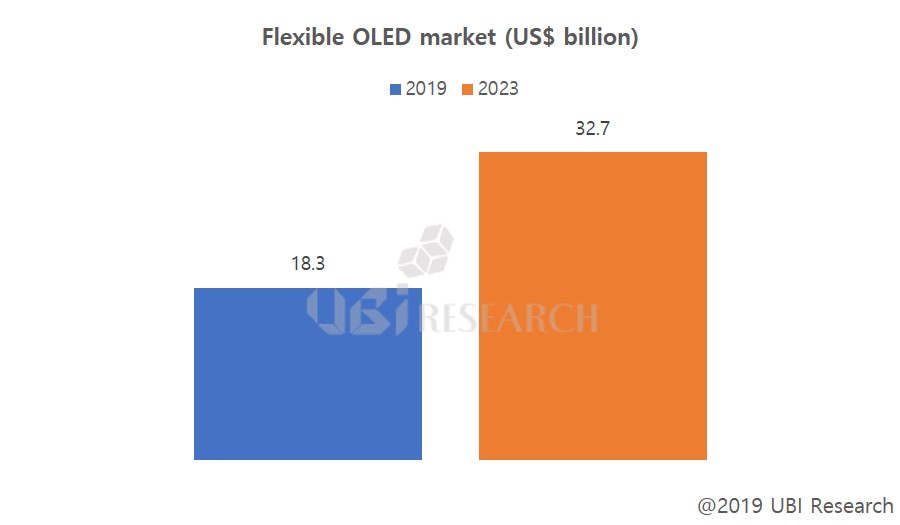 According to Yi, there are four types of flexible OLED products, including smartphones, foldable phones, watches and automobiles, and flexible OLEDs will be used in the monitor market next year. LG Electronics began to sell rollable OLED TVs, but the sales volume is so small that it will take much time to form the market. The foldable smartphones that Samsung started to sell are expected to be supplied to the market by 800,000 by the end of this year.

In addition, Yi predicted that Chinese panel companies’ flexible line production will expand very rapidly in line with the expansion of the flexible OLED market.

China is expected to have the world’s largest facility for flexible OLED production following LCD. 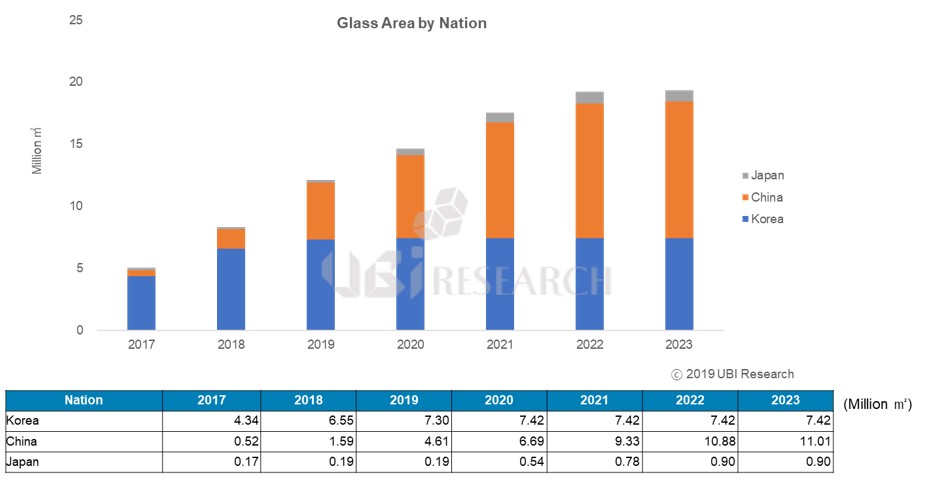 On Black Friday, the day of the biggest sale season in the US, LG Electronics and Sony have lowered the price of 65-inch OLED TVs from the previous month, further increasing price competition in the premium TV market. On the other hand, 55-inch and 77-inch OLED TV prices are the same except for Sony’s XBR77A9G.

In the TV market, which is growing in size, 65-inch TVs are becoming mainstream along with 55-inch TVs. Since 55-inch OLED TVs have already formed a premium TV standard of US $ 1,500 since October, LG Electronics and Sony have continued to reduce the price of 65-inch OLED TVs, another mainstream, to compete with QLED TVs.

Since August, LG Electronics’ OLED65C9 and Sony’s XBR65A8G have formed a lower price range than Samsung’s QN65Q90, and Black Friday is also trying to get a price advantage with a price lower than QN65Q90.

LG Electronics and Sony, which are striving to popularize OLED TVs, are paying attention to whether OLED TV’s position in the premium TV market can be further expanded.

Samsung Display presented OLED notebooks as a new growth engine in the stagnant IT market for global IT companies and introduced differentiated strengths that only OLED can provide.

Under the theme of ‘New Era of Laptop with OLED’, Samsung Display is a premium notebook with OLED’s thin and light design flexibility, infinite contrast ratio, DCI-P3 100% wide color gamut and color accuracy, and excellent outdoor visibility. Emphasis is placed on the essential image quality characteristics.

In addition, the company also unveiled a roadmap for fusion technology of OLED’s unique display sensors such as Fingerprint Display and Sound Display.

Samsung Display has already developed OLED for 13.3-inch and 15.6-inch notebooks in the first half of this year and has cooperated with HP, Dell, Lenovo, and Asus to supply panels to 13 kinds of notebooks. The company plans to expand its product lineup to mid-end and respond to market demand.

Samsung Display chose QD-OLED as the next generation premium TV. It will also have a big impact on the premium TV market, which is divided between white OLED technology and QLED technology.

Samsung Display announced a new investment and win-win cooperation agreement ceremony at Asan Campus on October 10 and will invest a total of KRW 13 trillion in QD-OLED production facilities and R & D by 2025.

The basic structure of QD-OLED is composed of blue OLED and red and green quantum dot color filters (QD-CF). Blue OLEDs emit blue light, and the red and green QD-CFs convert them to red and green, respectively. QD is also applied to QLEDs because it has the effect of further improving color purity.

Samsung Display will invest 13 trillion won by 2025 to build the world’s first QD display mass production line ‘Q1 Line’ at Asan Campus. The new line will start production in full scale in 2021 with an initial 30,000 sheets (8.5 generations) and will produce a 65-inch or larger ultra-large QD display. To this end, the company plans to convert existing 8G LCD lines into QD OLED lines step by step and gradually expand production capacity by 2025.

In addition, in order to accelerate the commercialization of new QD technology, the company plans to shift the existing LCD workforce to QD and hire new QD materials and process development experts. Samsung Display predicted that if investments start in earnest, approximately 81,000 jobs will be created over the next five years.

Lee Dong-hoon, president of Samsung Display, emphasized that “QD, a semiconductor particle that emits light close to natural colors, is the future growth vision of the large display industry.” “We will lead the premium display market with this investment.”