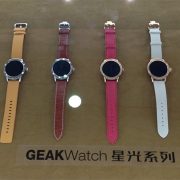 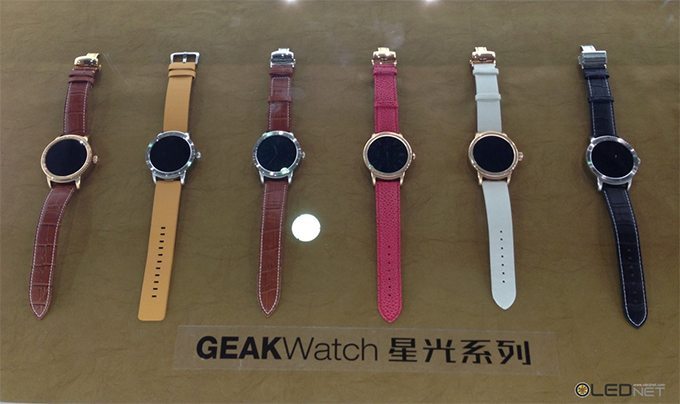 Hyunjoo Kang / jjoo@olednet.com
While most of wearable products including VR (virtual reality) device and smartwatch within Chinese market are equipped with LCD display, AMOLED’s presence is growing. Although the quantity is still low, several Chinese companies are presenting AMOLED equipped new wearable products such as VR and smartwatch, fast joining the general trend.
GEAK, a Chinese smartwatch company, is expected to release new GEAK Watch which is equipped with both AMOLED and e-ink. GEAK exhibited GEAK Watch in the CES Asia 2016 which was recently held in Shanghai, China. In CES Asia 2016, GEAK explained that the new GEAK Watch is the 3rd generation product that utilizes AMOLED in dark and e-ink display such as Kindle in bright conditions. According to the personnel the AMOLED used for the product is produced by Truly, and the release date has not yet been confirmed.
An expert of Chinese key AMOLED panel company told OLEDNET that while there were PMOLED equipped smartwatch products in China, not many used AMOLED. It was explained that this is due to higher price of AMOLED compared to PMOLED. 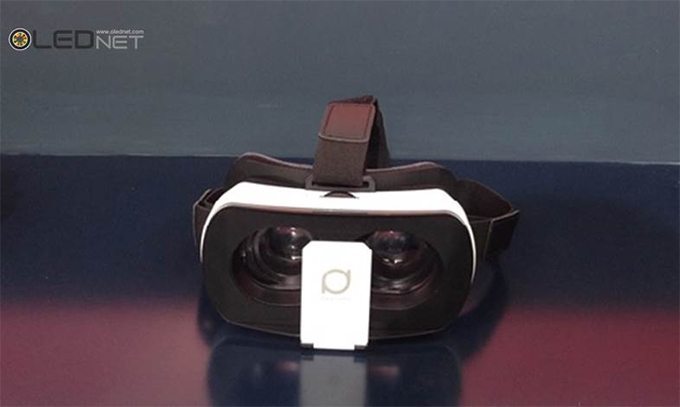 DeePoon, Chinese VR market leader, is expected to release new AMOLED based VR M2 soon. M2 was presented in CES Asia 2016. At the event, DeePoon explained that the company is the only one to release AMOLED VR and AMOLED can actualize higher Hz figure compared to LED installed LCD panel, and has better visual experience when playing games etc.
Chinese key mobile AMOLED company EverDisplay (EDO) is also releasing AMOLED panel for VR from this year. This company is planning to increase ppi of VR panel each year, and produce flexible AMOLED panel for VR with over 800 ppi before 2020.
An industry expert explained that although Korea is leading the wearable AMOLED sector, Chinese market is also recognizing that compared to LCD, AMOLED has many advantages such as faster response time and better for human eye due to lack of backlight and blue light.
https://en.olednet.com/wp-content/uploads/2016/06/16_6_1_OLED.jpg 404 680 OLEDNET /wp-content/uploads/2015/09/logo_oled.png OLEDNET2016-06-01 15:04:422022-07-07 12:20:44AMOLED Growing in Chinese Wearable Market
0 replies

Not Only Samsung and LG, but BOE and JDI Also Shows OLED Surge in SID

LG Elec. Launched ‘ Stylus 2 Plus ‘ in Taiwan
Scroll to top