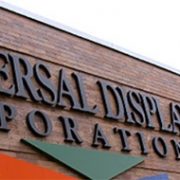 Following UDC’s top place in 2015 global OLED emitting materials market in terms of revenue, Idemitsu Kosan ranked 2nd, and this was followed by Novaled, Dow Chem., and Samsung SDI. In 2013, Dow Chem. was at the top of the market, but since 2014 UDC overtook the leadership. In 2016, LG Display’s OLED TV mass production line operation rate, materials structure of Galaxy Note series to be mass produced in H2, and other factors are expected to affect the OLED emitting materials market.

UDC is scheduled to announce 2016 Q1 performance on 5 May (local time).

Samsung Display OLED Equipped iPhone 7S in 2017? Is it Possible?