According to the ‘2021 OLED Components and Materials Report’ recently published by UBI Research, the ‘Galaxy Z Fold3’, which is expected to be released by Samsung Electronics in August, has UPC (under panel camera) and pol-less (or color filter on) encapsulation, COE) and S Pen technology are expected to be newly applied.

First, UPC, a technology that realizes the full screen of a smartphone by placing the front camera under the screen, has been mentioned using a transparent PI substrate and various technologies such as laser patterning, but in the end, the cathode electrode is patterned with a laser and the resolution near the camera is different. Thus, it seems that the maximum transmittance was secured. It is analyzed that the transparent PI substrate was not applied to the mass production process due to the high process temperature of the TFT.

Although many panel makers have developed pol-less technology, which replaces polarizers with color filters and low-reflection technologies, they could not be applied because they did not show as much anti-reflection effect as polarizers. The polarizing plate is effective in preventing external light reflection, but reduces the amount of light emitted from the OLED light emitting layer by more than 50%. If the polarizer is removed, more light can be emitted with the same power to the outside, so if the same luminance is implemented, battery consumption can be reduced. Samsung Display seems to have implemented pol-less technology by applying color filters, low-reflection films, and black pixel define layer (PDL).

The S Pen is finally applied with an electro-magnetic resonance (EMR) method, and the 30 um thick product used in the previous work is expected to be used as it is for the UTG. The AES method, which does not require a digitizer, was also considered due to the flexibility issue of the digitizer made of metal, but it is expected that the S Pen will eventually be applied in such a way that the digitizer is located on both sides of the panel. 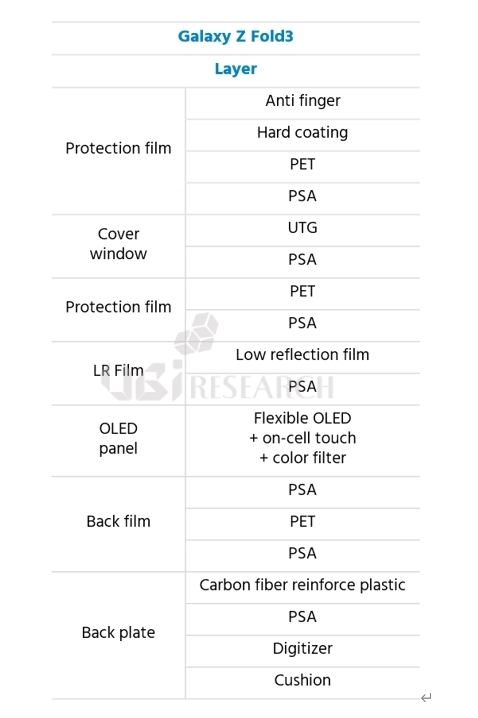