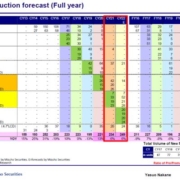 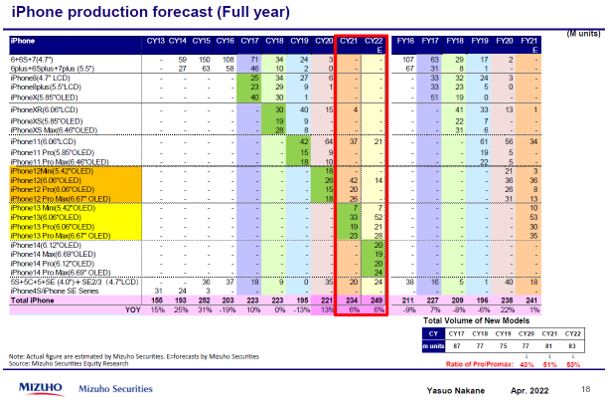 Regarding Apple’s iPhone industry, Senior Vice President Nakane said, “The strength of iPhone continued in 2021. iPhone production in 2021 was 234 million units, which was 3 million less than shipments of 237 million units. Sales were 240 million units which made it so that no inventory was accumulated.” He also announced that “In the first quarter of 2022, 62 million iPhones were produced, a 13% increase compared to the same period last year, and 53 million units are expected to be produced in the second quarter”. He analyzed the outlook of 2022, “Considering the strong first half of 2022 and the impact of new product price hikes in the second half of 2022, annual iPhone production in 2022 is estimated to be 249 million units, a 6% increase from the previous year, of which iPhone 14 is estimated to be 83 million.”

Next, regarding the older iPhone models, he analyzed that “iPhone13 series is expected to continue sales for the time being except for iPhone13 Mini. Among iPhone12 series, only iPhone12 will continue to be sold”. He also announced, “Samsung Display supplies panels for all models of the iPhone series, LG Display supplied LTPO models for the first time, and BOE’s panels will continue to be used in iPhone12.” In addition, he predicted, “Suggestions to apply not only LCD but also OLED to iPhone SE3 would continue and iPhone 11’s camera is expected to be used. Face ID would not be applied.” 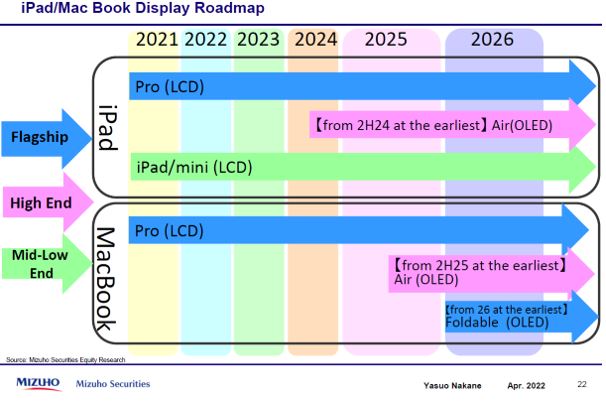 Regarding the timing of OLED application for iPad and MacBook, Nakane said, “It is expected that two models of iPad air with OLED will come out in the second half of 2024 at the earliest and OLED will be applied to MacBook Air in the second half of 2025 at the earliest.” Finally, “the business plan for the foldable model has not been decided, but it seems that they are interested in a PC-size foldable model rather than a smartphone-sized foldable model. The plan is to release them after 2026.” he predicted.