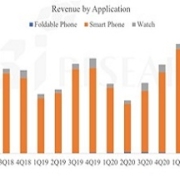 At UBI Research’s ‘2021 OLED settlement seminar for the second half of the year’ held on the 19th, UBI Research CEO Choong-Hoon Yi gave a presentation on the settlement of small/mid-large OLED industry and future market prospects.

According to the announcement by CEO Yi, the total shipment of smartphones and foldable phones in the third quarter was 167 million, up 22.7% from the previous quarter and 55.3% from the same period of the previous year. “The smartphone market contracted in 2020 due to the spread of Corona 19 and sanctions by Huawei, but the market is growing out of this situation in 2021 thanks to the popularity of Apple’s iPhone 12,” said CEO Yi.

Next, CEO Yi predicted, “In terms of OLED shipments by country, Korea dominates the market with 78.7%, but the Chinese market, which currently accounts for 21.3%, will gradually grow and the shipments of the two countries will become similar in about five years.” He also predicted, “In order for the industry to grow, the top-level set makers in the supply chain are important, and based on China’s numerous set makers and the large domestic market, it is highly likely that the leadership will be transferred to China in about five years.”

LG Display Wins Presidential Award for its Automotive P-OLED at the Korea Technology...

As autonomous driving technology advances, the adoption rate of OLED will i...
Scroll to top