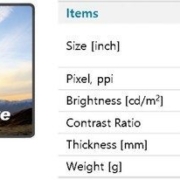 JOLED announced on last 17th that it developed the world’s first 21.6 inch 4K OLED panel with RGB inkjet printing process and shipped the prototype from April.

Developed by JOLED’s RGB inkjet printing process, the thickness of the panel is 1.3mm, weighs 500g, brightness is 350cd/m2, and contrast ratio is 1,000,000: 1. According to JOLED, this panel was applied to medical monitors.

<21.6 inch OLED and its specifications developed by JOLED, source: JOLED>

JOLED said ‘Ink-jet printing is a technology for printing by applying a light emitting material, which the production process is simple and easy to expand to diverse screen size, so it has been put into practical use. The top emission, viewing angle and color reproducibility of OLED panels will be improved.’

In addition, JOLED has announced its plans for the future ‘to expand its inkjet printing-type small and medium-sized OLED applications (such as gaming monitors, automotive applications, etc.) or suppliers continuously.’

According to Ubi research’s ‘ Market Entry Analysis for Solution Process OLED -The Possibilities and Opportunities‘, ink-jet printing is one of the process methods of the solution process, in which the ink-jet head is used to drop ink onto each pixel. Major panel makers are developing a solution process using this process, and JOLED is expected to take a lead in the future.

The solution process is capable of realizing large-area OLED panel with RGB pixel structure in Gen8 and above, has high material utilization efficiency, and is developed as a simple layer, which is advantageous in cost reduction in mass production success.

Meanwhile, Lee Choong-hoon, CEO of UBI Research, said, “Although the large-area OLED market is targeting the premium market with the WRGB method, the solution process will be the core technology since low-cost and high-production technology is key to replacing LCDs with OLEDs.”