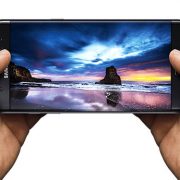 According to investigation by UBI Research, the shipment of OLED panel for smartphone in Q2 2016 is 88 million units, an increase of 72% compared to 51.2 million units in Q2 2015. This rapid growth of 4~6 inch OLED panel is led by key smartphone companies in Korea and China.

Not only Samsung, but Chinese companies are leading the market growth expanding the OLED application. In particular, Huawei’s smartphone business growth is significantly affecting OLED market. According to a market research company IDC, the global smartphone sales of the same period is only 3%. However, the sales of Huawei, possessing numerous OLED smartphone products, increased by 25% in H1 compared to the same period in 2015.

According to UBI Research, the total revenue of Q2 2016 global smartphone OLED panel market is USD 3,160 million, approximately 27% increase compared to the same period in 2015.