Apple released its Apple Watch Series 4 with enhanced healthcare features on a larger screen than before, in the Steve Jobs Theater at Apple Park in California, USA on September 12.

LTPO stands for low temperature polycrystalline oxide. It is a kind of TFT using only the advantages of poly-Si with good charge mobility and IGZO with low power driving. LTPO TFTs have low leakage current and good on / off characteristics, which lowers power consumption and increases battery life. 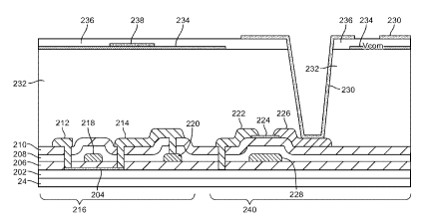 In addition, Apple increased the size of its Apple Watch 4 to 40mm and 44mm. The edge-to-edge screen is 35% and 32% larger than previous models by narrowing the bezel compared to previous models. The screen resolution was 368×448 pixels for the 44mm model and 324×394 pixels for the 40mm model. The display of Apple Watch4 is a plastic OLED made by LG Display with a maximum brightness of 1,000 nit. The Apple Watch Series 4 starts at US$399 for GPS model, while the cellular model starts at US$499. The Apple Watch Series 4 is available for pre-order from Septmber14 in the U.S. with the availability beginning September 21.

The round OLEDs in 1.2-inch and 1.4-inch of AUO are 326ppi, and it lowers an electric consumption at 30% versus former production goods. AUO also improves the visibility capacity in outdoor by embedding the brightness increase mode to make a display screen of two kinds of round OLEDs be clear even under bright sunlight.

The 1.3-inch OLED aimed at the smart watch for kids is light in weight, and strengthens the usability with a power saving mode and an intuitive touch interface function. 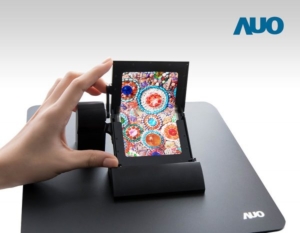 The 5-inch foldable OLED combines a flexible touch screen sensor that is developed by AUO itself.  The company said “it would provide excellent image quality, even if the curvature radius of the folded part is 4mm and less”.

For 5-inch rollable OLED, they explained “The thickness of the panel is just 0.1mm and only 5g. This model with the rolling radius of 4mm will provide wide color gamut”.

In last SID 2017, AUO has announced about that they applied the structure locating the TFT (Thin Film Transistor) and TFE (Thin Film Encapsulation) at the neutral axis to stand the compression stress or tensions during being folded. 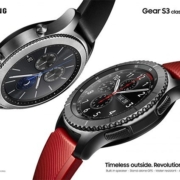 “Gear S3”, Samsung Electronics’ smart watch officially launched in Korea last 11 November, will be globally launched in USA, UK, Australia, France, Germany, France, Singapore, UAE, and others coming 18 November. It is anticipated that the markets will react enthusiastically as 54%(510 people) responded that they would like to buy Gear S3 based on a survey conducted on 994 people in USA.

The latest Samsung Gear S3 has implemented the Always-on-Display(AOD) function, always displaying the main contents on the screen using the 1.3-inch AMOLED Display. Battery life lasts at maximum for 3 to 4 days between charges since battery capacity has increased from 250mAh to 380mAh, improved by 27%. Moreover, it is made possible to be used for about 10 hours by setting watch-only mode when the battery remains 5%. The latest Gear S3 added useful functions such altimeter, barometer and speedometer for diverse leisure and sports activities embedding GPS coming with the IP68 level of waterproof/dustproof, and increased its benefits by installing SamsungPay. Particularly, it fixed outdoor visibility by enhancing its brightness by over 400nit comparing to the previous model and enables checking various information on the clear screen in bright sunlight, which used to be a problem for the previous models.

Meanwhile, it is expected, according to Ubiresearch, that the AMOLED panel market for smartwatch will have been grown by 14% per annum and comprised over 100 million ones market by 2020. 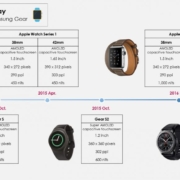 Apple Watch Series 2 has an improved water resistance rating of 50 meters and includes GPS unit for utilizing location information and tracking movements. Especially, the watch works with Pocketmon Go from Niantic INC which has been very sensational game all over the world. It was announced that the product has four models including Stainless steel, Hermès which Apple produced teaming up with Hermès, and Nike+ which Apple produced teaming up with Nike.

Samsung Gear S3 also includes GPS so it can make various useful functions altitude available for leisure activities and exercising with the sensors for altitude, atmospheric pressure and speed. Samsung Pay function also increases a variety of useful functions. In addition, with saving battery power ability improved, ADO (Always On Display) which is packed so that major alarms are always shown can make the watch is faithful to the original watch function. And the rotating bezel of Samsung Gear S3 attracts public gaze with its sophisticated design presenting the sensitivity traditional watch gave and its intuitive UI built up much better than before.

Both of the smart watches are packing an OLED display which can boast 1,000 Nits peak brightness so it is expected that a great deal of information can be shown on the clear display in bright sunlight. In particular, Apple enhanced the brightness of the display more than doubled than that of the prior product of 450 Nits and Samsung also enhanced the brightness 400 Nits more than that of the prior product. 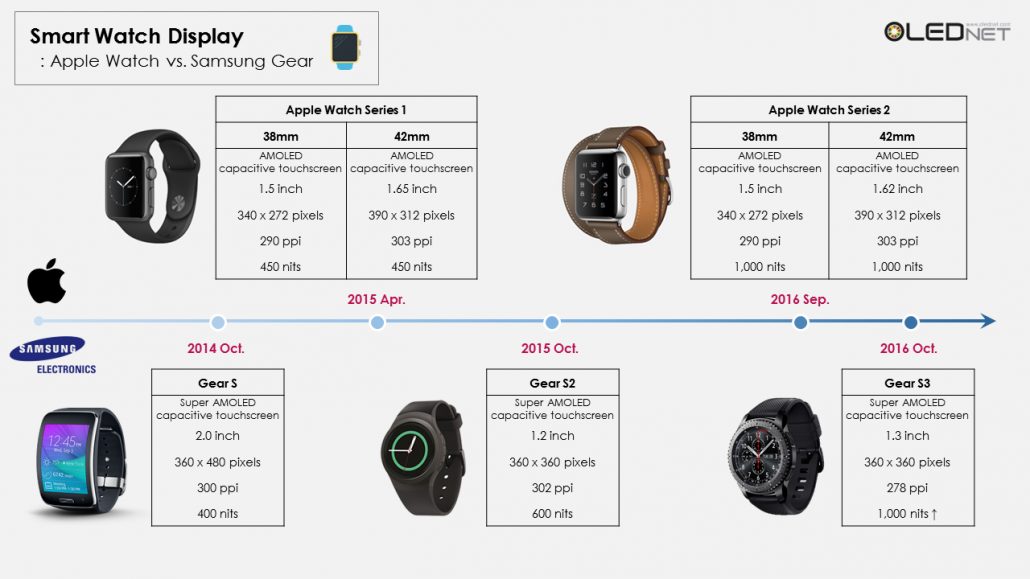 According to UBI research, the market of Smart Watch AMOLED panel is expected to be worth close to one hundred million in 2020 with average annual growth rate of 14%. 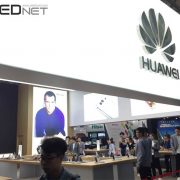 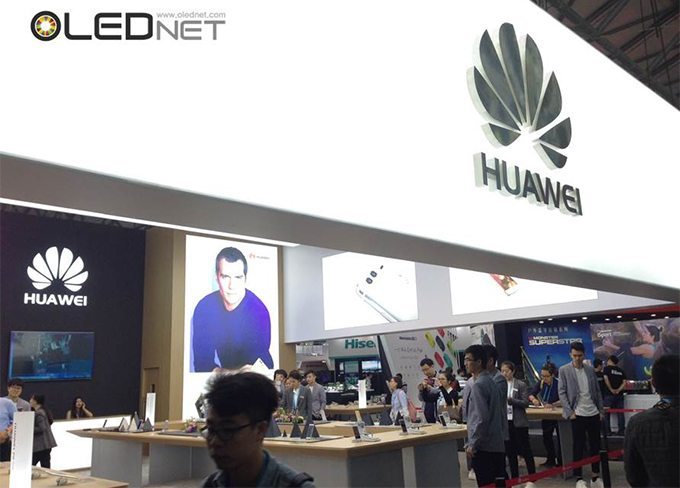 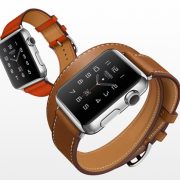 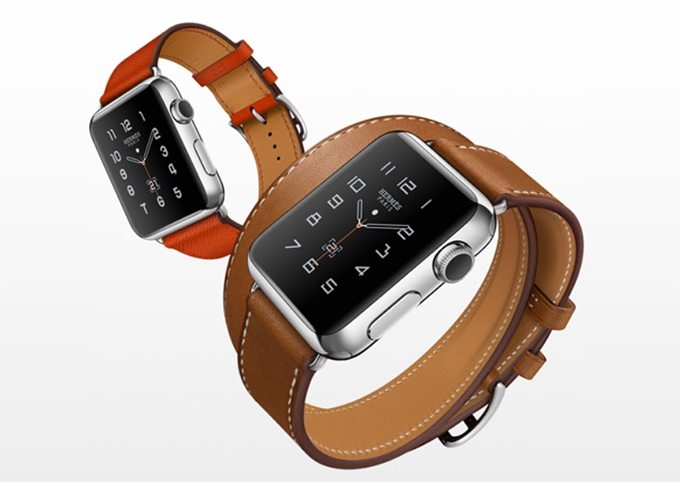 With the trend of smartwatch market’s below expectation growth, some believe that this year’s Apple Watch shipment volume will decrease by 25% or more compared to last year.

On 19 April, international media such as OLED-a reported this citing KGI investment. KGI’s research estimates that 10,600,000 units of Apple Watch were sold in 2015, and forecast that much reduced 7,500,000 units or less will be sold this year. What is worse, last year’s sales volume is the total of 8 months sales, and this year’s forecast volume is for 12 months.

KGI suggested 2 reasons for this decrease.

First, this is because the wearable device market is still an immature one, formed not too long ago.

Second, the product itself still has many flaws. Also, of the wearable applications, there is a lack of killer application that pulls in consumers. Hardware also needs further improvements. Short battery lifetime and iPhone dependent functions are analyzed to be factors preventing the demand increase.

KGI forecasts the mass production of the next Apple Watch will begin in Q3 2016. Some estimates that the next product will be released before that in June this year. However, this product is more of an S model upgrade with few changes to the existing product. KGI estimated that the demand improvement will take place when 2017 product, the new product after this one is released.

Much like the not so optimistic forecast of Apple Watch, the smartwatch market growth is also not meeting the expectations. In 2016 Wearable Smart Device International Forum and Exhibition held in Seoul hosted by Korean Display Industry Association, IDTechEX’s analyst James Hayward explained that smartwatch market is growing at below expectations, and it is estimated that eye wear market, such as AR and VR, will have greater growth rather than watch.

According to Huawei, although until now LCD has been used as OLED can produce profound black it is estimated OLED will be highly popular in Chinese market.

Huawei is already using OLED on smartwatch. Huawei Watch Active that began to be exhibited starting with CES 2015 uses 1.4 inch 286 ppi OLED panel with 400 x 400 resolution supplied by AUO. The thickness of the watch is 4.2 mm and rather thick, but the external design is highly detailed and beautiful much like luxury analog watch.

As Huawei, which has the highest market share out of Chinese set companies, started to actively push for OLED panel use in smartphone following smartwatch, other Chinese companies, including Xiaomi, are expected to rapidly join the OLED sector.

With the great increase of interest in flexible OLED from China and Taiwan’s small and medium-sized panel companies, diverse issues related to this are emerging.

Recent smartphone trend is moving from high resolution and specs toward diverse designs such as curved or bendable/foldable and flexible display that can differentiate applications. AMOLED flexible display is currently being applied to smartphone and smartwatch. However, only 2 companies, Samsung Display and LG Display, are supplying these high spec flexible AMOLED panel.

Small and medium-sized panel companies do not have the technology to mass produce high performance flexible AMOLED panel and cannot invest in mass production. For these reasons, Chinese and Taiwanese small and medium-sized companies are aiming for finding new applications where flexible PMOLED or low resolution flexible AMOLED can be applied and make mass production investment. Accordingly, set companies’ interest in flexible OLED applied application is also increasing.

Additionally, companies are in agreement that yield of flexible PMOLED that is applied to some smartbands does not meet demand. Taiwan’s wisechip and RiTdisplay, key PMOLED companies, are concentrating on developing flexible PMOLED and flexible OLED lighting. Taiwan’s AUO and Innolux, and China’s Visionox and EDO are also among those that are developing wearable flexible AMOLED.

Diverse application development where lower resolution flexible AMOLED, flexible PMOLED, or flexible OLED lighting, instead of expensive high-end smartphone and smartwatch, can be applied is essential. The outcome of this is forecast to greatly affect the growth of small and medium-sized OLED panel companies.