TCL CSOT’s T8 line was scheduled to start construction in March 2022 using the inkjet method, but there were rumors that the schedule continued to be delayed due to investment scale and yield issues. There are also talks about the project being canceled altogether. However, it seems that TCL CSOT has continuously improved its technology by continuously collaborating with JOLED. They also announced related contents at DTC 2021 held in November 2021.

It is is expected that mainly OLEDs for IT and automobiles will be mass-produced at the T8 line. The investment schedule and details of the TCL CSOT T8 project can be found in the ‘March China Trend Report’.

As of March, the highest-priced 65-inch premium TV model was Sony’s XR65A90J. The lowest-priced model was Samsung Electronics’ QN65QN80A.

According to UBI Research’s published quarterly report, “1Q22 Medium & Large OLED Display Market Track”, mid-to-large OLED sales in the fourth quarter of 2021 was up 29.1% (QoQ) from the previous quarter at $2.2 billion and up by 76.9% (YoY) from the same period of the previous year.

Although Samsung Display leads the way in the OLED market for mobile devices, LG Display overwhelming dominates the mid to large-sized OLED market. 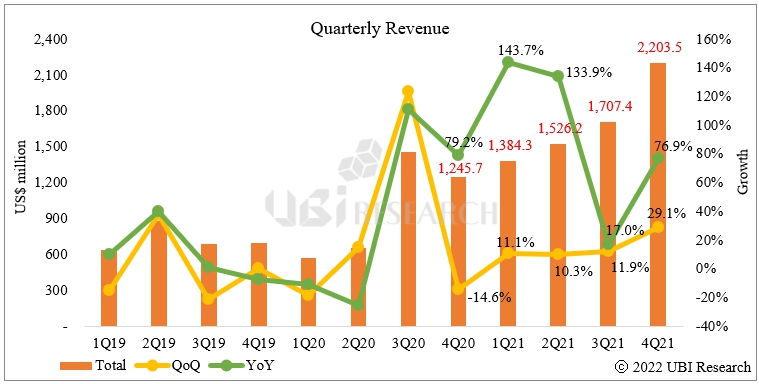 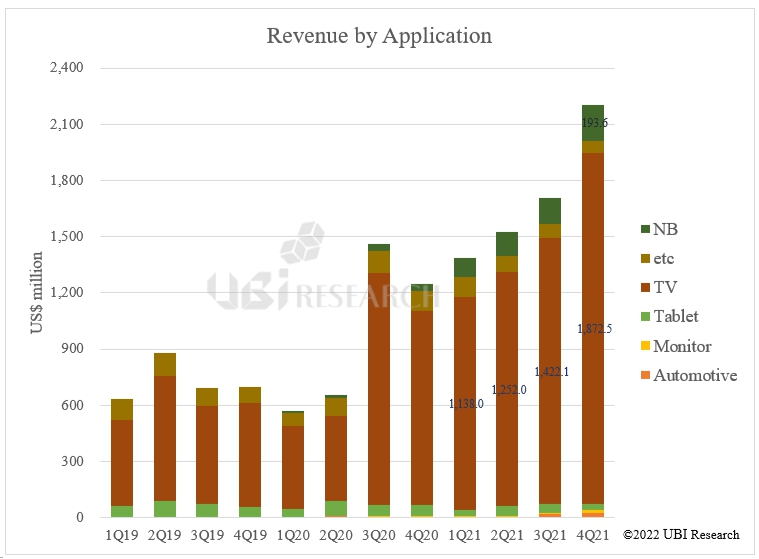 Samsung Display is expanding its OLED business from smartphones to IT applications such as notebooks and tablet PCs.  UBI Research predicted the larger than 10-inches, mid-to-large OLED market after 5 years.  The TV market, which accounts for 83.5% in 2022, will decrease to 62.1% in 2026. However, the IT market is expected to expand. 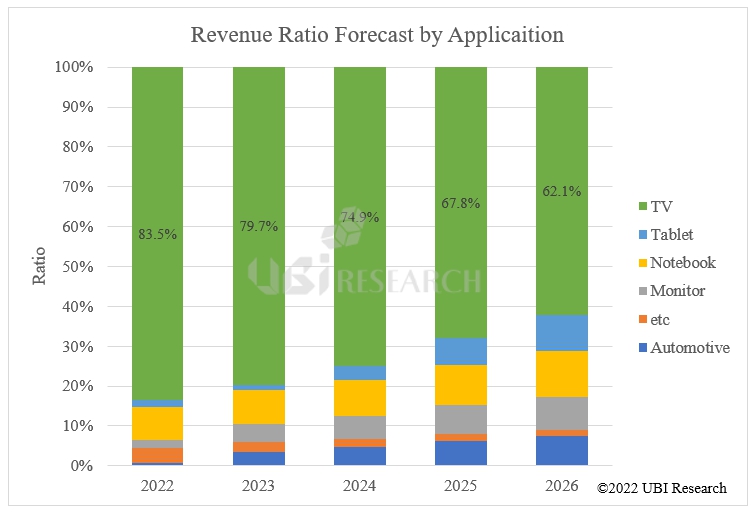 In addition, this analysis provides information for major product lines such as automotives, note PCs, monitors, and TVs by evaluating detailed quarterly shipments, sales performances, ASP by application, and OLED supply and demand analysis by application. It projects the market for the next 5 years.

According to the ‘China Trend Report’ published by UBI Research, Honor, a Chinese smartphone manufacturer, announced Magic4 and Magic4 Pro at MWC 2022 held on February 28th.

Detailed mass production line and quantity estimation of Honor Magic4 series are included in ‘China Trend Report’. The ‘China Trend Report’ provides various information on the Chinese display industry trends, such as the latest issues of major Chinese display companies, line trends and shipments, equipment disclosures by company, and introduction of new products in China. The report can be inquired on the UBI Research website.

Eindhoven, 25 February 2022. ECFG has acquired a minority share in Simbeyond through Eindhoven Venture Capital Fund II (EVCF II). Simbeyond has developed simulation software (Bumblebee) that can very accurately measure the effects of OLED materials at the device level. This is the first financing round for Simbeyond. The financing will be used to accelerate company growth (R&D and sales organization).

Simbeyond offers a software tool, Bumblebee. The software tool is a computer simulation for the use of materials in the engineering process of OLED materials. The current process is often based on trial & error, which means that this is expensive and involves time-consuming and experimental efforts. The software is developed for companies that want to simulate the effects of organic light-emitting or light-emitting diodes at the device level. Customers include research & development (R&D) companies and departments of large tech companies and other relevant R&D institutes (such as universities). The unique approach allows customers to analyze, predict and improve device performance. This leads to a shorter time-to-market and to reduced R&D costs for the electronic devices of today and tomorrow.

Simbeyond is a technology-driven organization. The past few years have mainly been dominated by product development. The goal in this new growth phase for Simbeyond is to become the preferred supplier of organic materials simulation software for the high-tech industry. Additionally, two more application areas will be materialized into an expansion of the current product line: batteries and nanolithography.

“Simbeyond is entering a new growth phase with ambitious goals and a drive for new opportunities. This investment and collaboration mean not only securing the resources to become the number one simulation tool in the OLED market, but also taking a step forward into new products,” said Siebe van Mensfoort, CEO of Simbeyond.

Hans Bloemen of ECFG: “To measure is to know and Simbeyond does that in its purest form. Bumblebee is only just getting ready to really enter the market. It now needs the right commercial attention with the most suitable profession. The investment ensures that this step towards growth can be realized. In addition to further developing the current market, a step can also be taken in a new market, battery technology. Together we hope to bring this technical gem to fruition.”

ECFG is an independent fund manager that advises, guides and invests in SME companies active in the business-to-business segment. The activities are primarily aimed at strategically and financially supporting innovative, sustainable and promising companies. The broad entrepreneurial investor base and relevant network also offer additional added value. Since the start of ECFG in 2008 and has guided more than 400 entrepreneurs and companies in business development, financing and strategy and realized more than 30 participations. ECGF operates in line with the 17 Sustainable Development Goals. The ECFG team consists of fourteen people and is located in the center of Eindhoven.

Simbeyond is a simulation software company which accelerates development of advanced materials and high-tech devices as used in state-of-the-art display, lighting and signage applications. Organic electronics, such as the organic light-emitting diode (OLED) displays of present-day smartphones, paves the way for mechanically flexible electronics. The unique approach provided allows customers to analyze, predict and improve device performance. This leads to a shorter time-to-market and to reduced R&D costs for the electronic devices of today and tomorrow. Simbeyond was founded in 2015, as a spin-off launched by the Technical University of Eindhoven (TU/e). The company is located in Eindhoven and its team consists of thirteen people. 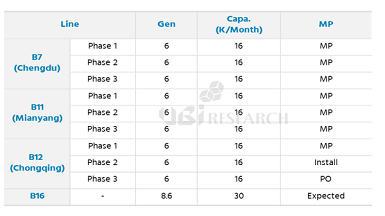 Along with the Touch IC supply issue, the overall shipments of major Chinese panel makers are also on the decline. According to the report, the total shipment of OLED panels for smartphones in China in January this year was 12.7 million units, a decrease of 27% compared to 17.4 million units in December last year.