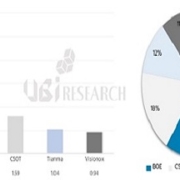 According to the ‘China Trend Report for the 1st week of December’ published by UBI Research recently, Among Chinese companies, BOE maintained the No. 1 position with an overwhelming share in OLED panel shipments for smartphones in October.

As autonomous driving technology advances, the adoption rate of OLED will i...