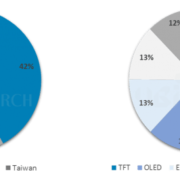 ■The OLED equipmentmarket is expected to reach $84.9 billion in 5 years.

■Korean and Chinese panel companies will take over 90% of investment in panel equipment.

According to ‘2017 OLED Manufacturing Equipment Annual Report’ published by UBI Research, the entire equipment market of OLED is expected to total$84.9 billion(about 93trillion KRW) from 2017 to 2021. In 2017, $16.4 billion(about 18 trillion KRW) will be invested in OLED equipment.

Hyun Jun Jang, a senior researcher of UBI Research forecasts that the two countries will lead the OLED market due to the massive investment from both Korean panel companies occupying the OLED industry and latecomers Chinese panel companies.

According to this report, China and Korea will actively invest in OLED equipment from 2017 to 2017, showinga 48% and a 42% OLED market share, respectively. In particular, the two countries are expected to make the largest investment of $32.8 billion(about 36 trillion KRW) in 2017 and 2018.