컨텐츠
You are here: Home / 컨텐츠 / Focus on / Display / What is the difference between the touch types of each model of iPhone... 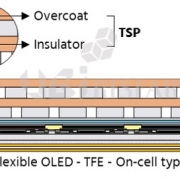 All of Apple’s iPhone 12 models, OLED panels will be used and consisted of four models. There are three sizes, 5.4 inches, 6.1 inches, and 6.7 inches, respectively, and 6.1 inches are divided into two models.

First, on-cell touch which a touch electrode is formed on a thin film encapsulation (TFE) is applied to 5.4 inch and 6.7 inch models. Each panel maker is called Y-OCTA (YOUM on-cell touch AMOLED), ToE (touch on encapsulation), FMLOC (flexible multi-layer on-cell touch), and unlike add-on touch, a touch electrode is formed directly on the upper layer without base films. Due to this, the on-cell touch has a higher process difficulty than the add-on touch, but it is advantageous to fabricate a thin OLED panel thickness, and the process cost is also reduced.

Add-on method is applied to 6.1 inches. A touch electrode is formed on the base film, and is attached on the TFE by adhesive. It has the advantage that the process is simpler than on-cell touch.

Recently, rumors that BOE is supplying 5.4 inch and 6.1 inch OLED panels to Apple have turned around, but 5.4 inch is on-cell touch type and it is still difficult to supply for iPhone 12 due to technical difficulty. BOE is developing a 6.1-inch OLED panel and has not received calls yet.

Who is the supplier of OLED panels for iPhone 12?