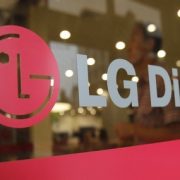 The decrease in operating profit in the 4th quarter is due to several reasons such as the overall decrease in price of display and strengthened KRW currency at the end of last year, product development cost to prepare for OLED business expansion in 2018, promotion costs and some one-off expenses, all of which are said to be settled down in the 1st quarter of this year.

LG Display plans to invest 9 trillion KRW by 2020 in large and small/ medium-sized OLEDs, and to accelerate the transition to OLED by implementing new technologies for OLED and oxide technologies. The 8G OLED investment in Guangzhou, China, has been postponed for three months for delayed government approval, but soon will be back on the right track in the second half of 2019.

TV OLED panels are expected to ship 250,000 to 2.8 million units in 2018 while 1.7 million units in 2017. LG Display is reported to strive to defend the price with valuable products offered to the market consumers as the market demand to supply still lacks. This year, securing profitability is the highest priority in the organization as well as maintaining ASP at the average annual level.

“As confirmed by CES 2018, the adoption of OLED panels has increased, and the market demand for OLED TVs will be steeply increased such as wall-paper, crystal sound OLED (CSO), and roll-able products,” stressed Sang-Don Kim, vice president of chief financial officer.  ”

As for small and medium-sized OLEDs, the 6th generation plant E5 in Gumi is increasing productivity by stabilizing mass production while the 6th generation E6 in Paju is preparing for mass production in the third quarter of this year. LG Display will secure the competitiveness of smart phone and prepare for the future by preempting the next generation products such as foldable. Further expansion of the POLED facilities investment will proceed according to the market situation and customer demand.

Meanwhile, in term of the share of sales by product based on the revenue in the 4th quarter of 2017, TV panel account for the largest portion as 40%, followed by mobile panel 28%, notebook and tablet 18% and monitor panel 14%, respectively.