컨텐츠
You are here: Home / 컨텐츠 / Focus on / Display / OLED performance analysis in the first half of 2020 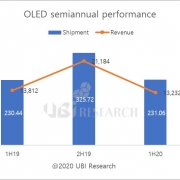