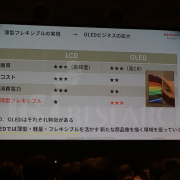 Mr. Atsushi Ban, Vice President of Sharp presented a future strategy that combines IGZO and OLED through a keynote session at the 28th FINETECH JAPAN, held in Makuhari Messe, Japan from December 5, 2018. 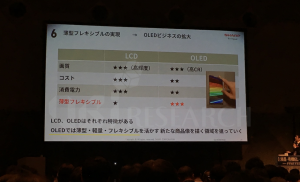 Ban emphasized “The proportion of OLED in the entire display market is expected to grow even higher, and the new value of OLED is no different than flexibility.”

He said, “Sharp is also planning a variety of applications using the thin, light-weight and flexible characteristics of OLED. From the third quarter of 2018, its Taki plant has produced 4.5G backplanes and the Sakai plant is under injecting glass for OLED and module processing for 4.5G 15K quantity.” 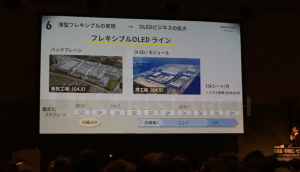 Ban also pointed out the possibility of expanding the OLED industry through flexible OLED, commenting that Sharp’s next goal is to develop foldable OLED that combines IGZO. Sharp has pioneered a new display technology, called IGZO, which has been known for its semiconductor properties for years, but Sharp has developed a crystalline form that maximizes its benefits for greater display performance, and IGZO improves the performance of display panels in three significant ways: lower power consumption, higher resolution and special benefits for touch-sensitive displays. Ban expected that it could create new value if IGZO is combined with medium to large sized foldable OLED or rollable OLED. 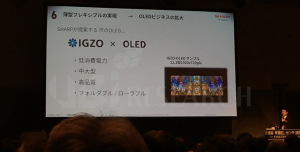 Finally, Ban introduced Sharp’s IGZO development roadmap and announced that it will develop much improved IGZO.